SMASHING MENTAL HEALTH STIGMA ONE YELLOW TULIP AT A TIME

“Our immediate goal five years ago is the same today—remind people they are not alone, that there is help and hope out there, it’s OK to not be OK, and that suicide should never be an option,” says Julia Hansen, Founder of The Yellow Tulip Project (YTP)–a nonprofit she cofounded with her mother Suzanne Fox, in Portland, Maine, with the mission to “smash the stigma surrounding mental illness” by building a community of people working together to make sure “hope happens.”

In observance of Mental Health Awareness Month, YTP’s Move it for Mental Health! month-long fundraising campaign spotlights the integral link between physical and mental health. Hansen is intimately familiar with mental health and suicide–during her sophomore year of high school she lost two of her closest friends to suicide. Struggling with grief and battling her own depression, she ended the silence surrounding the stigma by bringing a message of hope into the “darkest places.” She honored her two friends, combining their favorite flower and color to establish The Yellow Tulip Project to symbolize hope.

Nearly 400 ambassadors have amplified the message of hope, impacting tens of thousands of youths. Some 20,000 tulip bulbs are planted nationwide as part of YTP’s Hope Gardens every October during Mental Health Awareness Week. Communities host Hope Days with wellness activities, poetry readings, performances and tulip viewing across hundreds of Hope Gardens nationwide. The project’s meteoritic success is due to its youth-led campaigns, and the safe spaces YTP cultivates to discuss and dismantle the stigma about mental health. Hansen wants to make mental health as simple to talk about as any physical ailment. 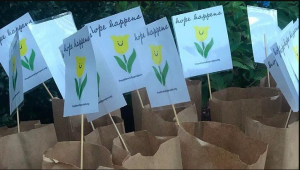 Hansen is proud of YTP’ global reach across schools and communities in seven countries—U.S., Canada, Barbados, China, Japan, Tanzania, and St. Lucia. As part of the Arctic Circle of Hope, Hansen works with colleagues in the Arctic to expand YTP’s message to that region as well. Funded by grants and donations, YTP partners with local chapters of such national organizations as The United Way of York County, The Rotary, The American Foundation for Suicide Prevention (AFSP) and Seeds of Peace– and is a member of the Global Coalition for Youth Mental Health, Mental Health America among others.

The Mental Health Pandemic Amidst a Pandemic

According to the 2021 State of Mental Health in America, nearly 10% of youth suffer from severe major depression—and 12.4% of youth who identify as more than one race. The highest rates of suicidal ideation is among youth, especially LGBTQ+ youth. During the first nine months in 2020, “77,470 youth reported experiencing frequent suicidal ideation, including 27,980 LGBTQ+ youth,” according to the report. Nationwide 1 in 5 young people (20% of U.S. population) suffer from a mental illness–but only 4% of the total health care budget is spent on mental health.

With a 30% rate increase in the past 10 years, youth suicide is now the second leading cause of death among young people in many states, including in Maine, says Hansen. Early this year YTP brought its message to younger elementary and middle-school communities. Four schools in Maine, Vermont and California will provide weekly wellness programming to middle schoolers, encouraging students to slow down, focus on self-care, find a friend in themselves with nature walks, breathing exercises “and taking care of their minds.”

“Young people are tired of the silence surrounding the topic and of suffering alone and losing their friends to suicide. We started in Portland, Maine in April 2016 with a cute logo and a few simple hopeful things to do. The way our message has taken off all across the country in such a short time is a testament to the energy and grit of Generation-Z,” says Hansen.

One of the biggest factors holding people from reaching out for help is the stigma surrounding mental health. Through public and online advocacy, and youth-led activities, YTP wants those suffering to know they are not alone. In a recent survey, 95% of the youth involved with YTP said they felt “less alone” says the Communications Director, Anais DerSimonian.

“Addressing this topic at an earlier age is so critical. Young people are stressed, overwhelmed, need to learn strategies for self-care and to know that mental health is intricately linked to their physical health. Getting help is a sign of strength not weakness,” says Hansen, underscoring how the pandemic-exacerbated mental health occurrences made YTP’s message of hope, actions, and community ever more critical. 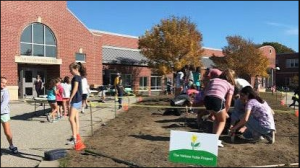 “Our shiniest stars of the year, besides the campaigns launched amidst Covid, included our youth-led podcast, a youth-written blog, and teaching Storytelling Alchemy—our storytelling training course helping the youth raise awareness of YTP in their schools. We also offer adult education classes online,” Hansen explains.

Building a nonprofit as a mother-daughter team is a journey hard to describe in words for both founders. The two share an obvious sense of respect and camaraderie both personally and professionally.

“From being in the darkest trenches together, to creating something that is changing people’s lives and giving people hope–this is one of the most humbling and inspiring experiences we have ever had,” says Fox. “We are believers in ‘if you build it, they will come’—out of the box thinkers fueled by a simple question: Why Not? Why not just try? Why not just see what happens?”

Humanizing mental health, YTP’s “I Am More: Facing Stigma” traveling photo exhibit was inspired by a similar exhibit by Boston’s McLean Hospital. On semi-permanent exhibit at Boston’s Logan Airport, the “beautiful, raw, black and white photographs” challenge the public’s perspective on what mental illness “looks like.” The cofounders hope to use the digital version of the exhibit as a conversation starter in schools and during community events. 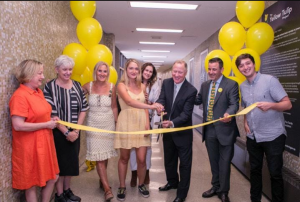 Forging Ahead With Smashing The Stigma

At April 28, 2016 launch of YTP, the founders were happy to get 10 Likes on their Facebook page. Five years later, with over 3,000 Facebook Followers, the founders hope the next five-year chapter will continue to amplify their “simple, hopeful message” as it resonates across schools and communities around the globe.

“We know we are one small piece of a big puzzle, but we want to see real change. We need to be proactive, not reactive. Not wait until a child takes their life and then bring in a grief counselor for a day. We want to see helpline magnets in all school bathroom stalls, conversations about mental health starting in middle school if not earlier, so young people know there is help and hope out there,” emphasizes Fox. “More than anything, we want folks to see a yellow tulip bulb and know that it represents hope, and that mental illness must be addressed just like any physical illness. We’re so proud of the role YTP is playing in smashing the stigma by having more communities, schools and students get involved–when youth and community members work together, we can do this.”