FORT KENT, Maine — Students and community members planted flowers on the front lawn of Fort Kent Community High School on Wednesday, Oct. 9, to raise awareness about mental illness.
About 60 people participated in the Yellow Tulip Project event during which they planted hundreds of the sunshine-colored flowers in an effort to remind people who are suffering with mental illness that they are not alone, they matter and it is okay to seek treatment.

Julia Hansen, founder of The Yellow Tulip Project, was a sophomore at Waynflete School in Portland when she launched the project in 2016 after losing two close friends to suicide. 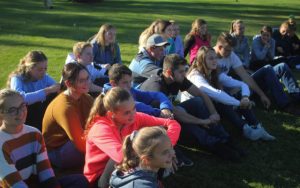 “Our mission is to smash the stigma surrounding mental illness and to build a community of people who realize that hope happens when youth and community leaders work together,” according to the Yellow Tulip Project website.

Prior to planting the tulips, those who attended the event were invited to write on Post It notes and stick them to a portable wall which asked: “What Makes You Hopeful?.” Responses included: Pepere Dale, Uncle Phil, My Dog, My Family, My Cross Country Team, Friends and Kindness.

These responses indicate that community support is important in terms of making people feel hopeful.

“Many people still think that it’s shameful if they have a mental illness; they think it shows personal weakness or a personal failing,” Fort Kent Town Manager Suzie Paradis said during the event. “In some instances, if left untreated, a mental disorder can lead to suicide.”

“For anyone battling a mental illness, just know that you are not alone,” Paradis added. “Together, let’s stand united and smash the stigma of mental illness.”

Sixth-grader Haidyn Saucier sang and performed on ukulele the song “I Don’t Know My Name,” by Grace Vanderwaal.

Aroostook County Action Program donated 500 tulip bulbs to the project, some of which participants were invited to plant in their own yards as messages of hope closer to home.