WHITINSVILLE – At its first in-person event in more than a year, ValleyCAST brought together inspirational music, insightful and impactful speeches and a beautiful flower garden to spread seeds and messages of hope to commemorate the start of Mental Health Awareness Month.

In collaboration with the Yellow Tulip Project, ValleyCAST’s first-ever Hope Day was held May 1 outdoors at the Dennis H. Rice Community Plaza at Alternatives’ Whitin Mill, as a way to bring conversations about mental health to the forefront.

“It’s so important we don’t treat it as something you can’t talk about,” said Heather Elster, executive director of the Whitin Community Center, which participated in the event, along with No One Walks Alone Peer Recovery Center and ValleyCAST.

The three organizations planted the yellow tulip garden last fall on Mental Health Awareness Day, with the hope of having an event in the spring when the flowers were blooming. That vision came to life on Saturday during the two-hour Hope Day. 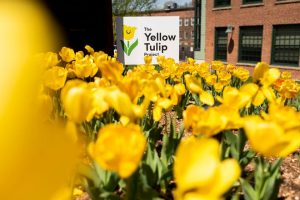 “We’re so grateful to actually see people again,” said Cristi Collari, director of Community Outreach for Open Sky Community Services, of which ValleyCAST is a subsidiary. “It’s so important to us to be able to have inclusive events. We’re all about community.”

The event – put together by Michelle Sayles, assistant director of Community Outreach for Open Sky Community Services – also featured music by husband-and-wife duo The Promise Is Hope and wellness offerings, including a mindful meditation exercise and Zentangle activities. 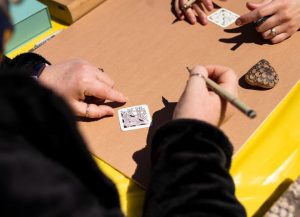 “Today reminds me that hope happens, because here we are together on a little windy, a little cold, beautiful Saturday morning,” said Suzanne Fox, executive director of The Yellow Tulip Project, a youth-driven, nonprofit organization that aims to reduce mental health stigma.

Fox, who is from Portland, Maine, and her daughter Julia created The Yellow Tulip Project five years ago. Just before Julia entered her sophomore year of high school, during a vacation while walking along the beach one day, her daughter revealed that she had been depressed and needed help, Fox recalled. “How did I miss this? How did I not know?” Fox said she asked herself at the time.

Then, Julia’s best friend, Payton, took her own life on Halloween; four months later, her second best friend, Baeta, committed suicide. Reeling from the losses, Julia later was propelled by a newfound purpose – “she was tired of the stigma; she was tired of losing her friends to suicide,” Fox said – and in honor of Payton’s favorite flower and Baeta’s favorite flower, The Yellow Tulip Project was born.

What started as something “so simple,” Fox said – planting tulips and aiming to normalize conversations about mental illness – has now spread throughout the country through student ambassadors who become involved by bringing the program to their school or college campuses. 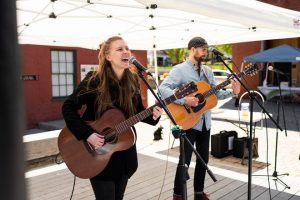 Anna Mullen, who also spoke at Saturday’s event, is one of those students who became involved after hearing about The Yellow Tulip Project while attending Fontbonne Academy in Milton. As a junior, she was required to complete a social injustice project; within a year, more than 50 people at her school were participating. Now, a student at Assumption University and the director of the Youth Board for The Yellow Tulip Project, she said every day she is “inspired by the honesty and commitment” of those involved to keep the organization’s mission moving forward.

Collari learned about The Yellow Tulip Project when she attended the Holy Cross Non-Profit Careers Conference and met Paul Piwko, a professor at Assumption and co-developer of the National Museum of Mental Health Project. She was interested in collaborating on a project for ValleyCAST, and he introduced her to The Yellow Tulip Project.

For ValleyCAST, becoming involved in The Yellow Tulip Project was important because “we’re focused on inclusivity and having people of all abilities come together and enjoy activities equally,” Collari said. “We want people to be included and treated the same. Everybody needs to have their voice.”

To continue the collaboration, ValleyCAST will host The Yellow Tulip Project’s photography exhibit, “I Am More,” from Sept. 2 to Oct. 8 at the Spaulding R. Aldrich Heritage Gallery in Alternatives’ Whitin Mill. This exhibit, currently a semi-permanent exhibit at Logan, aims to change perceptions of what mental illness “looks like.” Two smaller-sized versions of the black-and-white photography portraits were on display during Hope Day.

“You can’t look at someone and know they’re struggling with mental illness,” Fox said, adding, “You don’t know what’s going on under anyone’s icebergs.”

Fox stressed that it’s important to “remind people it’s OK to not be OK, and there’s hope and support out there.” In her closing remarks, she noted that tulips need to be planted in the winter, that they need to go through the dark and cold times in order to pop up through the ground in the spring. “If that isn’t a metaphor for people struggling with mental illness,” she asked, “what is?”